We ran the first Ada Initiative Census of open technology and culture in March 2011. We aimed to find out where the women are, and how they perceive their community. We’re ready to share the results of this, our first project under the Ada Initiative banner.

In this post, we’ll set the scene with a simple set of response breakdowns.

The total number of respondents was not quite 3000 people: 2844. We don’t have a good sense of how many people would identify with the term “member of the open technology and culture community”, but consider that Wikipedia alone had 10411 “very active” editors in July 2010: a true census of this space at any given moment could possibly involve some hundreds of thousands of people.

Number of participants by gender

Respondents were required to state their gender identity in one of three categories: “Female”, “Male”, “Other”. Slightly more than half identified as female and a further 2.8% as other.

Number of participants by field

We asked people what fields within open technology and culture they were involved in. Of the people who answered this question, 80.8% said they were involved in open source. It’s not surprising that the Ada Initiative, whose founders have long experience in open source, is best able to reach that community. Open source (and related tags like free software) also have a long history of encouraging participants to identify with a community of developers and users. It’s impossible to say from this data to what extent each of these factors came into play: 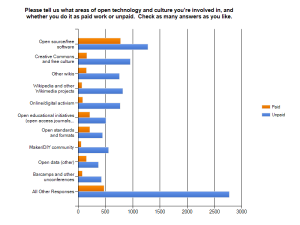 Number of participants by primary field

Here the penetration of the census into open source really shows: more than half of people replying identified it as their primary field. Transformative works fandom was the only other primary field to break 10%.

Coming up next: the big question, perceptions of participation of and attitudes to women in these communities.

Disclaimer: the Ada Initiative Census was a self-selected survey of self-identified participants in “open technology and culture”, conducting in March 2011. Participants were recruited largely through advertisements in relevant women’s groups (eg LinuxChix) and through participant’s social networks. These results have substantial limitations, and in particular cannot be used to draw inferences by comparison to other surveys with different methodology, such as the FLOSSPOLS gender survey results.

Want to see a follow up to the 2006 FLOSSPOLS survey of the distribution of gender of the open source community? We do too! It’s one of the programs the Ada Initiative will run if we get enough funding. Help us get started by contributing to the Seed 100 fund-raising campaign.

Census, March 2011: Demographic breakdown of responses by the Ada Initiative is licensed under a Creative Commons Attribution-ShareAlike 4.0 International License.