The Ada Initiatives latest matching sponsor is Singly, a San Francisco startup writing an open source platform that provides a standard API to information from social networking and data sharing tools like Facebook and Google. Singly is currently hiring and has been rated one of Silicon Valley’s hottest 20 startups by Business Insider. Singly is matching up to $1000 of individual donations made on January 24 – 26, 2012, Pacific time. 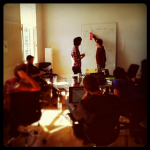 Valerie: Tell us about Singly.

Matt: Singly was founded by three people who had been working on personal data projects in other startups independently and discovered through meeting each other that they were struggling with a lot of the same technical challenges in building the product. They were all writing metaservices – combining data from other networks to make a product that derives new value from information that was already available through those services. The challenge of integrating enough with several different services enough to make it work was something that required a lot of raw engineering effort whereas what they really wanted to work on was the things that differentiated their product. So Singly was created was created to write an open platform to solve that problem that could be extended to and also to provide individual people a way to manage their data online.

Merci: We will have an app gallery which is a store of free apps. You can come in and find new ways to look at your Foursquare data or Facebook data or any combination of this social data information. We are focused right now on reaching as many developers as we can.

Valerie: How do you serve both developers of applications and users who want to control their data?

Matt: They are groups of people who already need to work with each other and we make it possible. Particularly in this space right now theres a huge gulf between [users and developers] and the status quo makes it difficult to work directly with your customers. There are all these intermediaries. Were trying to reduce the friction in that equation, making all of it as open as we can.

Valerie: Whats the advantage to an individual developer of using Singlys services?

Matt: It is much faster and easier to develop an application. We provide a single API that they can use to interact with all of a users data, instead of writing to Facebooks, Googles, and everyone elses APIs. Its all there in one place in a standard format.

Valerie: Whats the connection between your product and sponsoring the Ada Initiative?

Matt: A big part of our mission is to empower individuals to take control of their information online. Right now so much of what we do on the web is not really ours and is locked up inside organizations and used for their benefit, not really ours. We are an afterthought. We want to turn that situation around and create a world where individuals who are creating that information and experiences online are the ones who are primarily able to benefit from that. Whatever you do, you always have a copy of that data. Roughly half of those individuals are women and if we are going to open up participation and ownership in this way, I think we need to be thinking about it in an egalitarian way. As a open technology company, we want to have a community around our services, the Locker Project in particular, and we want that community to have a lot of representation from women.

Valerie: Why would a developer want to work at Singly over another startup?

Merci: We are a very transparent organization. Everyone on the team has a lot of voice on what they work on. Our meetings and process are focused on everyone being heard. We want it to be okay to fail and its hard to find an environment like that.

Matt: A work environment that makes it a fun and enjoyable experience to work towards such a big goal.

Merci: Women already work here! I used to work at a games company and got used to being the only woman.

Matt: We are 20% women now and we want to increase that! Two specific roles opened up this week, infrastructure developer and front-end developer.

Merci: We especially want young women to be part of the founding members of the Singly community and were reaching out to them now.