Due to the incredibly generosity of the open tech/culture community, we’ve hit 2/3 of the Ada Initiative’s fundraising goal – that’s 2/3 of the funding we need to operate until March of next year!

With your help, we can reach our goal in the next 7 days before the end of the drive on October 31. Tell your friends why you donated to support women in open tech/culture: Because you want your daughters to have a chance to have an open tech/culture job? Because Wikipedia is the 5th most popular web site in the world but only 9% of editors are women? Because you are tired of sexism in your community? Send an email, write a tweet, post on Facebook – just let people know! 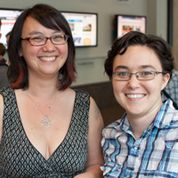 By working with the community instead of against it, the Ada Initiative is actually succeeding in changing the culture of open technology and culture. We can’t do it without you!

Now 2/3 of the way to our fundraising goal! 7 days left to be part of the success by the Ada Initiative is licensed under a Creative Commons Attribution-ShareAlike 4.0 International License.