The first Ada Initiative Feminist Hacker Lounge was held at the PyCon US conference last weekend. It was located in the Ada Initiative booth on the exhibit floor, and sponsored by the Mozilla Foundation and PyCon US. 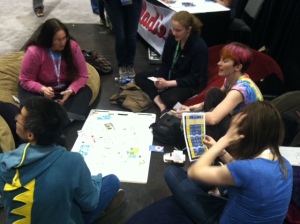 Our bean-bag filled space was overflowing with friendly Python folks all weekend, working on projects and getting to know each other. We quickly merged our booth with the PyLadies booth next door so we could share the bean bags and the community (with plenty of jokes about “lowering barriers” and “breaking down the silos”).

People used the lounge as a friendly space to get advice on their current projects, get some hacking done, or join in the scheduled discussions. The most popular sessions were the Impostor Syndrome session and the Security Threat Modeling workshop taught by Leigh Honeywell, which filled the space to capacity for nearly 2 hours. Our schedule included:

Many people remarked on how friendly and welcoming the Feminist Hacker Lounge was. Several people came back on the second day to say it was their favorite part of the conference. The lounge was a good place to make new friends for women and people of all genders, especially for people who didn’t know anyone at PyCon to start with.

Many other awesome women’s events and spaces were at PyCon this year: the Women’s Tech Office Hours suite was open from 6:00pm to 3:00am, the PyLadies Lunch was a sold out event with several dozen women attending, and the PyLadies organized a nail-painting session, to name just three. The PyCon US organizers went out of their way to create a welcoming conference for women, and they succeeded!

Create your own feminist hacker lounge

Like the idea of a friendly, women-supportive space at the next conference you attend? Putting together your own feminist hacker lounge or women’s office hours doesn’t take a lot of work:

Thanks to our feminist hacker lounge organizers, Lukas Blakk and Liz Henry, and to our sponsors, Mozilla Foundation and PyCon US.