Good news for accessibility on the web: a new open source plugin to make dropdown menus more accessible to people with disabilities is now available for several WordPress themes, including the popular Twenty Ten through Twenty Thirteen themes. The accessible dropdown menu plugin was made possible by Amy Hendrix, Graham Armfield, AdaCamp attendees, and the supporters of the Ada Initiative.

An AdaCamp attendee pointed out that the menus on the Ada Initiative and AdaCamp web sites did not work for people using screen readers, a device that converts text or other information on a computer screen into speech, Braille, or other forms of output usable by people with visual impairment. As a result, much of our web site content was hidden from anyone with a range of disabilities, including visual impairment and difficulty using a mouse.

We immediately asked our WordPress consultant, Amy Hendrix, to make our menus accessible. Amy adapted an open source accessible menus plugin written by Graham Armfield for the Twenty Twelve theme we use on our web sites and installed it within days of the request.

Now the accessible dropdown menus is available for free download on the WordPress plugin directory, with Amy and Graham supporting the plugin together going forward. If you are using any of the Twenty Ten, Twenty Eleven, Twenty Twelve, Twenty Thirteen, or Underscore themes, you can install the plugin today. If you aren’t, you can request adding support for your theme to the plugin (or pay Amy to do the work, as we did).

Why is accessibility important for women in open tech/culture?

Just a few ways to improve the accessibility of your events and web sites: 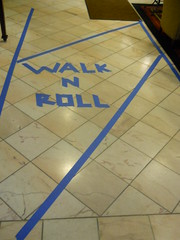 Thank you to AdaCampers, Amy Hendrix, Graham Armfield, and the supporters of the Ada Initiative for making this work possible!