As a community, we have made more progress for women in open tech/culture in the last 2 years than we did in the previous 10 years.

Together with 100 seed funders, we founded the Ada Initiative because we wanted our friends to be able to go to open source conferences without being groped and harassed. Two and a half years later, we’ve made great progress towards that goal, and towards supporting women in open technology and culture in general (e.g., Wikipedia, fan fiction, and open hardware). For example, we’ve run 3 AdaCamp unconferences, taught 7 workshops for allies, and helped hundreds of open tech/culture conferences adopt strong anti-harassment policies.

With your help, we can keep up the good work. In the next year, we will run more AdaCamps, teach more Allies Workshops, help design community codes of conduct, teach women how to overcome Impostor Syndrome, make conferences friendlier, and otherwise work to increase the participation and status of women in our communities. These programs are only possible with the support and donations of people like you.

Now is the time to donate to support our programs for the next year. The money we raise between now and August 30th will determine what we can accomplish this year.

Yes, I want to donate to support women in open tech/culture!

What we’ve done so far 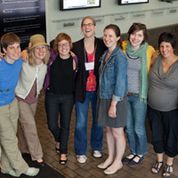 We have made more progress for women in open tech/culture in the last 2 years than we did in the previous 10 years. The Ada Initiative has been a big part of the change you are seeing: we ran 3 AdaCamps for over 300 women in open tech/culture, taught over 150 women how to overcome Impostor Syndrome, taught 7 Allies Workshops to over 100 people, and made hundreds of conferences safer for thousands of people. We also raised awareness of the problem of sexism in open tech/culture, reaching over a million people with radio appearances, keynote speeches, editorials, interviews, and magazine articles.

Why your donations are important

Our work is only possible thanks to the donations and public support of people like you. At the Ada Initiative, we do work that is too difficult for volunteers alone: work that requires months of sustained full-time effort from paid staff, who are often the targets of rape and death threats. Without your financial support, we would not have been able to run AdaCamp, create and teach the Allies Workshop, or achieve nearly universal adoption of anti-harassment policies in the open source community. Over 50% of our budget comes from individual donations from people like you: programmers, students, entrepreneurs, activists, librarians, Wikipedians, and more. Our average individual donation is over $300/year, including more than 50 people who have given between $1000 and $10000.

If you have donated before, thank you. You are making a difference.

Be part of the solution

If you would like to see more than 2% women in open source, more than 10% women Wikipedia editors, or an equal chance for women and girls to take part in the open tech/culture revolution, please donate to the Ada Initiative today! You can also share with your friends and colleagues why the Ada Initiative’s work to improve gender diversity in open tech/culture is important to you.

Donate to the 2013 Ada Initiative fundraising drive today! by the Ada Initiative is licensed under a Creative Commons Attribution-ShareAlike 4.0 International License.