October 15 2013 will be the fifth annual Ada Lovelace Day, an international celebration of the achievements of women in science, technology, engineering and maths. Ada Lovelace Day is about sharing stories of women — whether engineers, scientists, technologists or mathematicians — who have inspired you to become who you are today. The aim is to create new role models for girls and women in these male-dominated fields by raising the profile of other women in STEM. 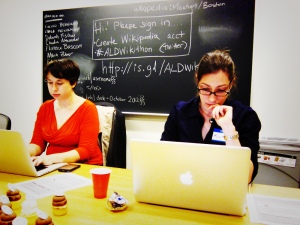 Suw: As ever, we’re holding Ada Lovelace Day Live! on 15 October, this year at Imperial College London with the support of the Biochemical Society, Texas Instruments and our other partners and sponsors. We also have nearly 25 grassroots events around the world which have been organised independently. I am very excited about how widely the day is going to be celebrated this year!

For the first time, we are also going to be publishing a book, A Passion for Science: Stories of Discovery and Invention, a collection of 17 essays about pioneering women in science and technology. It is an exploration of how we passed some of the most important milestones in science and technology, from the identification of the Horsehead Nebula, to the writing of the first computer program, the development of in vitro fertilisation and the detection of pulsars. All of these discoveries and innovations were achieved by women. Frequently unsung, often underpaid and under-appreciated, and sometimes misrepresented, these women defied social convention and endemic sexism to excel. There stories are compelling and inspirational, and I am very excited about publishing this anthology, which will initially only be available from findingada.com.

Ada Lovelace Day’s aim is fighting the invisibility of women in science and technology? Are you measuring its success? How successful has it been?

Suw: We’ve grown incredibly since the first Ada Lovelace Day in 2009, which started by simply asking people to write a blog post about a woman in technology who had inspired them. The idea attracted people to participate in ways I could never have imagined: We had people from all over the world writing in many languages with very little promotion, although we also garnered a lot of media and press coverage.

Since then, we’ve added the Ada Lovelace Day Live! ‘nerd cabaret’ as well as inspiring grassroots events all around the world. There are so many events, I often hear about them after the fact rather than before the day.

Whilst originally the day was focused on blogging about women in tech, blogs are less popular than they were in 2009. We are now encouraging an emphasis is on Wikipedia editathons, to increase the number and quality of articles on women in STEM. Those contributions are powerful and long-lasting, and editathons are open not just to people who are able to attend in person, but to anyone online who wishes to join in.

Ada Lovelace Day has grown far beyond the day itself, and there are a range of events throughout the month. I also give talks about women in STEM at schools, libraries and to professional organisations throughout the year.

What are some of your future plans and ambitions for Ada Lovelace Day?

Suw: I’ve love to do more, including creating educational materials, more books and even creating a professional network to allow women in STEM to support each other. At the moment, it is an issue of resources. To organise ALD I draw primarily on my own time and money, with a small group of volunteers to help, but I am actively seeking foundations and corporate sponsors to develop a sustainable base for which our activities can grow.