Luke Kanies, founder and CEO of Puppet Labs, says, “Puppet Labs is committed to increasing diversity and access for all, throughout the tech community. We’re delighted to share our space with an organization whose core mission is to encourage and enable women’s involvement in, and contributions to, open source technology and culture.”

The change of venue brings Puppet Labs’ sponsorship of this year’s AdaCamps from the Gold to the Platinum level. Puppet Labs has supported women in IT automation and technology for many years through programs such as ticket scholarships for women to attend PuppetConf, hosting other women in technology events, and being a founding sponsor of the Ada Initiative. Puppet Labs makes open source IT automation software that is familiar to nearly every software administrator and developer working today. Learn more about working at Puppet Labs here.

We thank both Puppet Labs and New Relic for their generous sponsorship of both AdaCamp Portland and previous AdaCamps! 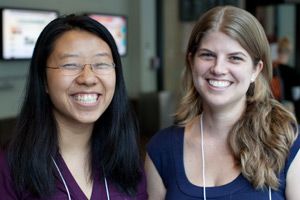 In 2014, the Ada Initiative will hold three AdaCamps located in technology hubs on three continents: Portland, Oregon, USA; Berlin, Germany; and Bangalore, India. Applications to AdaCamp Portland are now closed. Applications for AdaCamp Berlin and Bangalore will be open soon.

Your organization has the opportunity to sponsor AdaCamps in 2014 and reach women leaders in open technology and culture on three continents. Contact us at sponsors@adainitiative.org for more information about becoming a sponsor.

Thank you to the AdaCamp 2014 platinum sponsors Google and Puppet Labs, and silver sponsors New Relic and Simple.