“What I love about AdaCamp is how consistently wonderful the event is – how you can go from one thought-provoking session to another, how you can meet a fascinating person doing great work and then turn around and meet someone who also blows you away.” — Anonymous AdaCamper

Excited about AdaCamp and want to attend the next one? Check out our main AdaCamp page to find when applications open for the next AdaCamp.

75 people who identified as women or female attended the main track of AdaCamp Portland, held on June 21-22, 2013, with an additional 24 attending an Ally Skills track on June 23rd open to participants of any gender.

“It was really transformative for me to be around so many women in such a safe space. I don’t know that I’ve ever felt that supported or cared for before!” — Anonymous AdaCamper

AdaCampers enjoyed the diversity of subject matter throughout the conference, the respect that was given each topic and the speakers, the opportunity available for anyone that wanted to participate and how involved on the whole AdaCampers were.

“The discussion of feminist quantified self was probably the best session…but, honestly, I enjoyed everything. I’ve never been to a better conference/event.” — Coral Sheldon-Hess

75 people attended the main track for people who identified as women, with a further 24 attending the Ally Skills track for people of any gender. The attendees came from four countries. The majority of our attendees were from the United States, with the rest from Australia, Canada and India.

We worked hard to make AdaCamp Portland diverse in many different ways. Some statistics from our post-conference survey (35% response rate):

To make AdaCamp more accessible to students, non-profit employees and others living outside of the Bay Area, and to increase the diversity of our attendees, we offered 5 travel scholarships to AdaCamp Portland. One international grant was awarded to an AdaCamper from Australia, and our four North American travel grants were awarded to three AdaCampers from the United States and one from Canada.

AdaCamp Portland’s main track was primarily structured as an unconference, with attendee-organized and facilitated sessions around issues facing women in open technology and culture. Based on feedback from the previous three AdaCamps, we added some more structure to the beginning and end of the schedule. 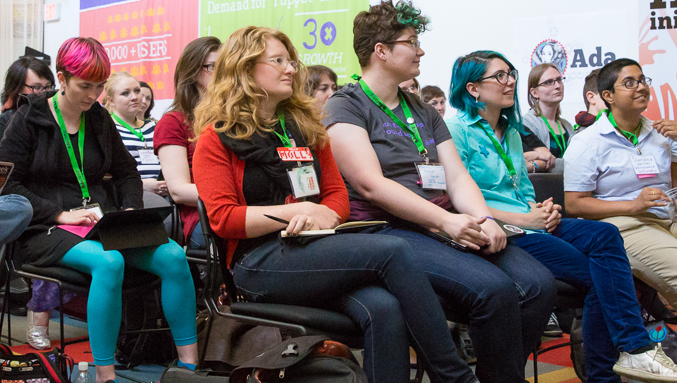 For most attendees, the first session of AdaCamp’s main track was an Imposter Syndrome workshop. Women’s socialization is often less confident and competitive than men’s, and women are therefore especially vulnerable to Impostor Syndrome — the belief that one’s work is inferior and one’s achievements and recognition are fraudulent — in open technology and culture endeavors where public scrutiny of their work is routine. As at AdaCamp San Francisco, the opening session was a large-group Imposter Syndrome workshop facilitated by Ada Initiative founder Mary Gardiner. The Imposter Syndrome workshop was followed by introductory sessions on areas of open technology and culture that might be new to participants; including everything from linux kernel development and python to fundraising for feminist projects and trans misogyny in feminist spaces.

“I heard from women who were just entering the industry, as well as veterans handling tricky social and political problems. Just because you go into an individual contributor career track doesn’t mean you avoid political problems! It was nice to hear from women who had experienced similar situations to me, and to be able to offer advice on tactics and processes to try to resolve conflict and get what they wanted out of their work.” — Selena Deckelmann

On Sunday afternoon, attendee-organized sessions moved towards skill-sharing and creation, with a multitude of workshops, make-a-thons, edit-a-thons, hack-a-thons, and tutorials that ranged from assertiveness and basic self-defense to open source database options and how to make and launch phone apps.

AdaCampers reported learning a variety of new skills including but not limited to wikipedia editing, best practices in conducting edit-a-thons, zine making, responding to micro-aggressions, dealing with code of conduct violations, licensing, public speaking, and what one AdaCamper described as “increased confidence through sense of belonging and tactics for navigating tech communities.”

Lightning talks were held on both days of the main track. Any AdaCamper that wanted to share their knowledge, experience or passion – on a topic either in open technology and culture or not – was given the stage for 90 seconds. AdaCampers talked about subjects from bird watching to how to get paid what you’re worth to starting a PyLadies group in your area.

“It gave me some starts towards being comfortable acting in situations of casual sexism—and that would extend to other -isms. I’d like to do it again at some point, to gain even more confidence.” — Kamal Marhubi

In our retrospective survey (25% response rate), 17% of participants indicated that they were not confident in welcoming women to their community, could not respond to actions unwelcoming toward women in their community and did not know how to create a community that is inclusive of women. After the Ally Skills workshop, 100% of respondents indicated that they now felt that they could do these things. All survey respondents said that the workshop taught them responses to avoid when responding to unwelcoming actions in my community. 67% percent of survey respondents said that the workshop made them realize that they have a position of power to influence change and gave them actionable examples of things they could do to make my community more welcoming to women. 100% respondents would recommend the workshop to otheres. 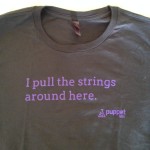 On the evening of Friday June 20, Puppet Labs hosted a reception for main track attendees at their Portland office. Thank you to Puppet Labs for hosting a welcoming and well-thought out event!

Following the tradition established at AdaCamp DC and San Francisco, instead of a large social event on Saturday night, attendees had dinner in small groups at restaurants around Portland. Attendees were invited to host dinners on behalf of their employers. Thank you to Mozilla, New Relic, Etsy, Intel, Heroku and Code for America and their representatives, for hosting dinners.

Several AdaCampers wrote publicly about their experiences at the event:

“This was my fourth AdaCamp and as usual, I came away full of ideas, with new friends and invigorated from all the wonderful conversations.” —Selena Deckelmann

“I feel like I walked away with a deeper understanding and appreciation for what is going on with feminism beyond my special little bubble. I met a ton of amazing, talented, and passionate women looking to change the world. I even got some Wikipedia editing done and learned more about ways to accomplish my goals. It made me want to take the time to re-evaluate my goals and what I want to work towards in the future.” —Sara Marks

“It was a good session! Several of us had lunch together and talked more about Rosie’s passion for translating articles from one language into another! She spoke very movingly about the politics of translation, especially as it is relevant to women’s history. If we don’t put this information online, it can more or less disappear from public awareness.” —Liz Henry

“Most importantly, AdaCamp was a great place to meet like-minded people. This is really important for women in a male-dominated field, where getting professional and emotional support can be a challenge. There were lots of opportunities to talk to the other participants, and the organizers are providing several means for us to continue communicating with each other after AdaCamp. I think this is the most valuable thing I will get out of this event: a network of people who can help me as I continue to learn and grow as a developer and a feminist.” —Morgan Kay

It was an incredible experience: I met fascinating and inspiring people, learned new [technical] skills, got some ideas for projects to work on, and received a ton of career affirmation. There were a lot of web developers and other solidly-tech people there, but we also had a handful of journalism-minded folks, quite a few librarians, Wikipedia editors and more.” —Rachel Alexander

“I don’t know how to explain what an empowering, fun experience AdaCamp and Open Source Bridge have been. I wish the words would come.” —Coral Sheldon-Hess

“AdaCamp is invite-only, but instead of being elitist and Bilderberg-esque, it made for the most actively and intentionally inclusive event I’ve ever attended. […] AdaCamp was such a great experience and I’m encouraging all my friends to try and attend future events.” —Helen Halbert

“I think the most rewarding thing about these conferences, for me, is some mix of the I’ve-been-there-too commiserating and solution-sketching, making people laugh, laughing at new inside jokes, literally seeing things in a new light, deepening my relationships with people important to me, and passing on the stuff I’ve learned.” —Sumana Harihareswara

“I discovered that User: Rosiestep and I share the same passion in writing biographies of women on Wikipedia, and we decided to do collaborative editing and run multi-city edit-a-thons in future.” —Netha Hussain

Each AdaCamp we strive to improve the event. After each AdaCamp, we publish any resources we developed and license them CC BY-SA for use by the community.

Since the conclusion of AdaCamp Portland, we have been developing an AdaCamp toolkit — a set of guidelines and documents that we use to plan AdaCamp in its generic form, and, we hope, a useful tool for anyone planning an unconference. We expect to release the toolkit CC BY-SA this year.

We’re thrilled with the increasing success of AdaCamp at bringing women together and developing the current and next generation of women leaders in open technology and culture. AdaCamp is one of the key events of the Ada Initiative, with huge impact on its attendees and the communities they are involved in. Our 2014 AdaCamps in Portland, Oregon, USA; Berlin, Germany and Bangalore, India; are part of our strategy to reach a wider range of women by holding more frequent but smaller AdaCamps around the world. We are developing plans for AdaCamps in 2015 and 2016 now; if you’d like to be notified of the next AdaCamp, sign up to our announcement mailing list or follow us on Twitter.

Thank you to all of the AdaCamp Portland attendees and AdaCamp Portland sponsors for giving us the support we needed to run this event and make it what it is. You are what makes AdaCamp a success!

Your organization has the opportunity to sponsor AdaCamps in 2014 and reach women leaders in open technology and culture. Contact us at sponsors@adainitiative.org for more information about becoming a sponsor.