2014 is a record-setting year for the Ada Initiative! Since our last progress report, we’ve run one AdaCamp and opened applications for two more AdaCamps. We’ve taught 9 Ally Skills Workshops to over 200 people and kicked off a train-the-trainers program. Our Impostor Syndrome Training is ready to launch as a standalone class open to the public. Conference anti-harassment policies continue to spread to new fields, and specific, enforceable community codes of conduct are catching on for the first time. Read the rest of our (short, we promise!) mid-year report for 2014.

Most exciting of all, in 2014 we are holding three AdaCamps on three continents: AdaCamp Portland, AdaCamp Berlin, and AdaCamp Bangalore. This is a year of firsts for AdaCamp: first time we have three AdaCamps in one year, first AdaCamp in Europe, first AdaCamp in Asia, first AdaCamp in a non-primarily English-speaking country, and first time we had to close applications early because we ran out of space. AdaCamp Portland is already finished, and applications for AdaCamp Berlin and AdaCamp Bangalore are open now (and filling up fast). We are tentatively planning four AdaCamps on three continents in 2015! Thank you to all of our sponsors who made these three AdaCamps possible: Google, Puppet Labs, Ada Initiative donors, Automattic, Mozilla, Red Hat, Simple, New Relic, Linux Foundation, Spotify, Stripe, Gitlab, OCLC, O’Reilly, Pinboard, and Python Software Foundation.

You’ll notice that Ada Initiative donors are an AdaCamp sponsor this year. This is because AdaCamp is a money-losing program for us – corporate sponsorships and registration fees don’t cover the full costs of the event. In our last progress report, we said we were planning to run a larger standard format conference called AdaCon. We were planning to do this mainly because it would be easier to raise enough corporate sponsorship to cover the full costs of the conference. However, it would also mean that we would hold the event somewhere that women in open tech/culture already have lots of resources – like the San Francisco Bay Area – and that would be expensive and difficult to get to for women outside that area. We decided to instead hold more, smaller AdaCamps around the globe so that we could reach the women who need AdaCamp the most. As a result, Ada Initiative donors are likely to be major sponsors of AdaCamp for the forseeable future, and we thought you should get the credit!

Taking Impostor Syndrome Training to the next level 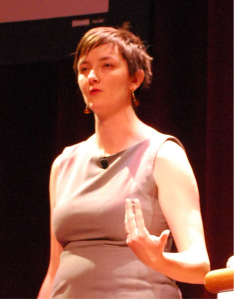 We ran our Impostor Syndrome Training at AdaCamp Portland with some new exercises and material and got rave reviews! Impostor Syndrome is the feeling that you aren’t actually qualified for the work you are doing and will be discovered as a fraud, and severely affects the career, health, and happiness of many women in open tech/culture. After more than a year of tinkering and refinements, our Impostor Syndrome Training is now ready to be run as a 2-hour standalone class. We plan to start teaching classes in late 2014, after our yearly fundraising drive wraps up.

The Ally Skills Workshop (formerly Allies Workshop) has really taken off! So far this year we taught 9 Ally Skills Workshops to over 200 people, where we teach men how to support women in open tech/culture with simple, every day techniques. We teach Ally Skills Workshops at conferences, inside companies, and as a publicly available class. People love it: “This was an amazing class. Great scenarios, great conversations. I really enjoyed not only the guided discussion, but break out conversations with co-workers were hugely enlightening.” And it works: “I’ve already witnessed a couple of incidents where coworkers who attended the workshop corrected themselves after saying something that could be misconstrued.”

Fighting to stop conference harassment was our very first project, and three years later, it is still bearing fruit. Our conference anti-harassment policies and codes of conduct continue to spread to more and more fields, this year including library-related conferences, co-working spaces, and hackathons. We also continue to publish more specific advice and refinements, such as how to handle harassment swiftly and safely, how to decide when a person who has harassed someone can return to an event, and a collection of resources for creating inclusive events. Our plans for the rest of 2014 include introducing better guidelines for alcohol at events to signal that people are still expected to behave with respect to each other, even when drinking.

Community codes of conduct get real

Community codes of conduct are getting more popular this year – and this time around, some of them are specific and enforceable! Tim Chevalier created this useful comparison of community codes of conduct showing which ones include three important elements: specific details about what isn’t allowed, how to report violations, and information about how it will be enforced. We also continue to provide free consulting to companies and organizations on implementing codes of conduct in their communities as well as conference anti-harassment policies, working with over a dozen organizations and people this year alone. If you have questions about implementing a code of conduct or anti-harassment policy, email contact@adainitiative.org.

The Ada Initiative is growing

If it seems like we accomplished a lot more in the last 6 months than usual, that’s because it’s true! We hired our third staff member, Suki McCoy, our Director of Operations, in November 2013, joining Executive Director Valerie Aurora and Deputy Executive Director Mary Gardiner. Mary was on maternity leave for six months after Suki joined, so we went from 1.5 full-time staff for the first three years of the Ada Initiative, to 2 full-time staff in the first half of 2014, and have been at 2.5 full-time staff since May 2014. The difference in what we can accomplish is astounding! We hope to continue growing during the next few years, until we can satisfy the full demand for AdaCamps, Ally Skills Workshops, and Impostor Syndrome Training. Thank you to all the Ada Initiative donors and sponsors who are a crucial part of this important work!

A record-setting year for the Ada Initiative: 3 AdaCamps, 9 Ally Skills Workshops, standalone Impostor Syndrome Training, and more by the Ada Initiative is licensed under a Creative Commons Attribution-ShareAlike 4.0 International License.