Could these AdaCampers be FEMINISTS?

“Are you sure you want to use the F-word?” a worried friend asked us. The word she meant was “feminist” – which we had just plastered all over the website for AdaCamp, the Ada Initiative’s conference for women in open technology and culture. After all, she pointed out, when was the last time a large corporation donated $50,000 to a non-profit that called itself feminist?

We’re sending 3 copies of the F-word sticker (plus a few more Ada Initiative stickers) to everyone who donates $128 or more to support women in open technology and culture before October 8, 2014, during our 2014 fundraising drive.

The sticker is 2.25 inches wide by 1.5 inches tall (5.7 cm x 3.8cm) and die-cut. Now you can proudly identify as a feminist every time you use your laptop, ride your bike, or walk with a cane – the possibilities are endless! 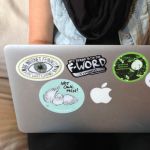 About the Ada Initiative

Your donation goes to the Ada Initiative, a 501(c)(3) tax-exempt charity dedicated to supporting women around the world in open source software, Wikipedia, fan/remix culture, and similar areas. We lead the movement to adopt anti-harassment policies at conferences and conventions, run AdaCamp unconferences for women in open tech/culture around the world, teach men how to support women in their communities, and help women overcome Impostor Syndrome.

Show the world you aren’t afraid to use the f-word, and support women in open technology and culture everywhere! Donate today!

Why $128? What is with your weird donation amounts?

Did you know Béyoncé was going to make feminism cool again when you designed this sticker?

We swear, the new stickers were already printed and sitting in a box in Valerie’s apartment when we saw the photos from Béyoncé’s VMA show on Twitter. We are incredibly happy that Béyoncé is using her star power to make identifying as a feminist more popular.

What is open technology and culture?

Open technology and culture is a term we made up to include open source software, Wikipedia, fan fiction, and similar areas. It’s anything where people collaborate on and share their work over the Internet and let other people reuse and share the result. For example, anyone can read Wikipedia, or edit Wikipedia, or reuse things from Wikipedia (as long as they credit the creators properly).

Why do we need more women in open technology and culture?

In many (but not all cases), open tech/culture communities are overwhelmingly male (and overwhelmingly white). Wikipedia is averaging around 10-15% women editors, and open source software is only about 2% women according to the most recent study. At the same time, Wikipedia and open source software are changing the world we live in – most of Google, Facebook, and Twitter’s servers are based on open source software, as are Android phones and the Firefox web browser. We believe that women have to be involved in the creation, design, and use of the Internet or it won’t serve women needs and desires.